Clearwater County’s Broadband Internet Project is a multi-year initiative that aims to deliver high-speed Internet connectivity to a majority of residents and businesses in the County. High-speed Internet access has been consistently identified as an essential component of economic and social well-being by County residents. A vast majority of County residents and businesses are under-served by available Internet services, most of which fall below the Canadian Radio-television and Telecommunications Commission’s (CRTC) standards for broadband speeds.
In the County's Strategic Plan 2019-2022, Council has formally recognized the goal of providing Internet accessibility to the majority of County residents and businesses as a key priority. It also adopted a municipal broadband policy that provides a framework to guide the initiative. As part of its efforts to bridge the digital divide in the County, Council has committed to building a high-speed broadband Internet network and is currently considering a plan to achieve this goal.
For more information, please see answers to FREQUENTLY ASKED QUESTIONS about the broadband project.

Universal Broadband Fund (UBF): The UBF submissions for the March 15 deadline were completed on time. No updated information as of April 27, 2021.

Starlink: Data gathering and testing still under way will have an update on next broadband report.

Universal Broadband Fund (UBF): The UBF submission for the March 15 deadline will be completed on time. The Phase 6 application is being split into two.

Materials/ Electronics: 350 km of industry standard Micro duct ordered to supply the approved backbone project. Received favourable pricing in response to our tender. First delivery to be made by April 1, 2021. 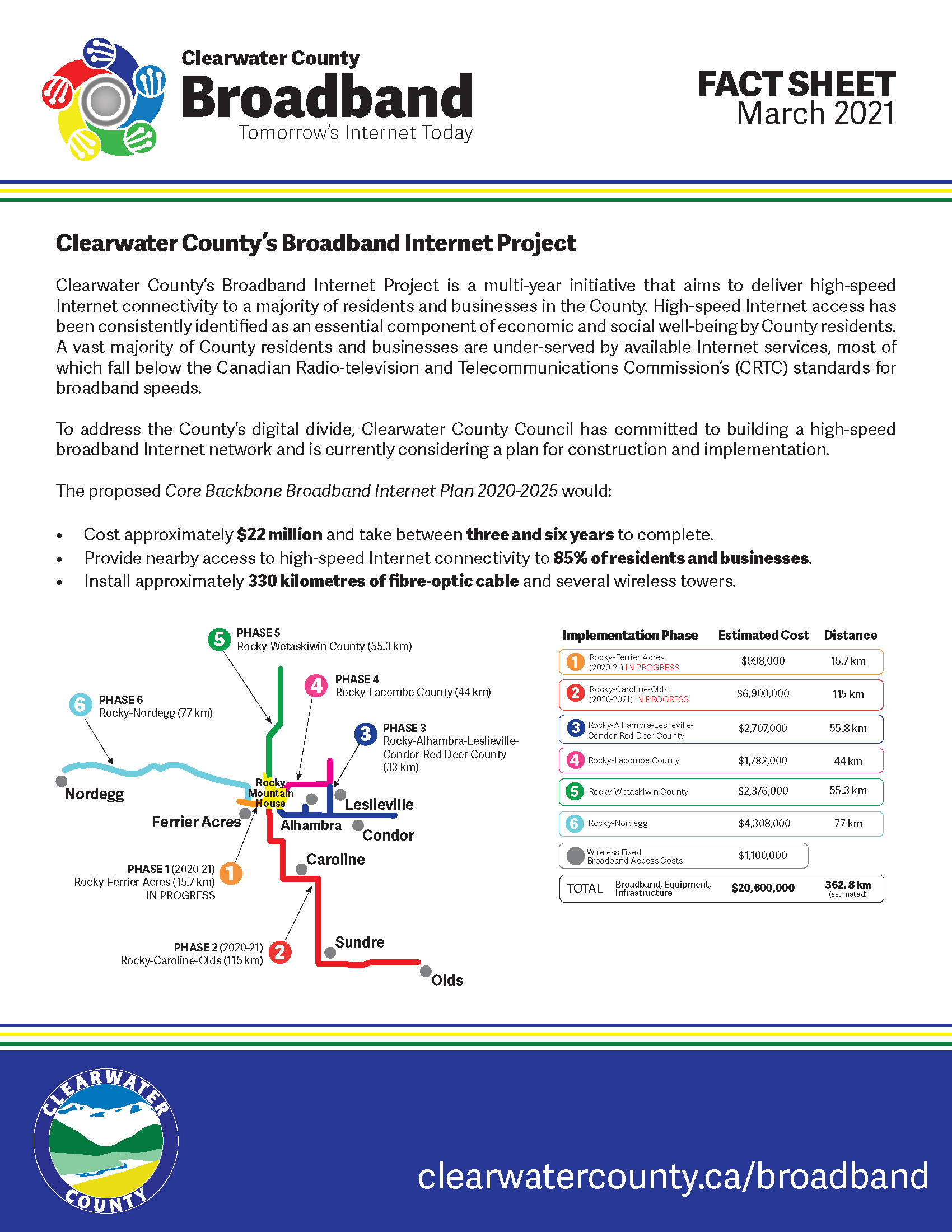 The Core Backbone Broadband Internet Plan 2020-2025 is a six-stage project that would use a combination of over 360 kilometres of fibre-optic cable and wireless towers to provide high-speed Internet connectivity throughout the County. Please see our Broadband Fact Sheet (pictured right) for more information about the Core Backbone Plan.

The strategy involves a Fibre-to-the-Node (FTTN) model, which brings a fibre connection to hundreds of customers within a given radius of the node. From there, Internet service providers (ISP) will deliver service from the node to the individual destination. This means the County will not be providing end-user Internet services but encouraging competition among ISPs.

The project would cost approximately $20 million and would take between three and six years to complete. After which, 85% of residents and businesses would have nearby access to the core backbone and the opportunity for high-speed Internet connectivity.

To address the County’s digital divide, Clearwater County Council has committed to building a high-speed broadband Internet network and is currently considering a plan for construction and implementation. 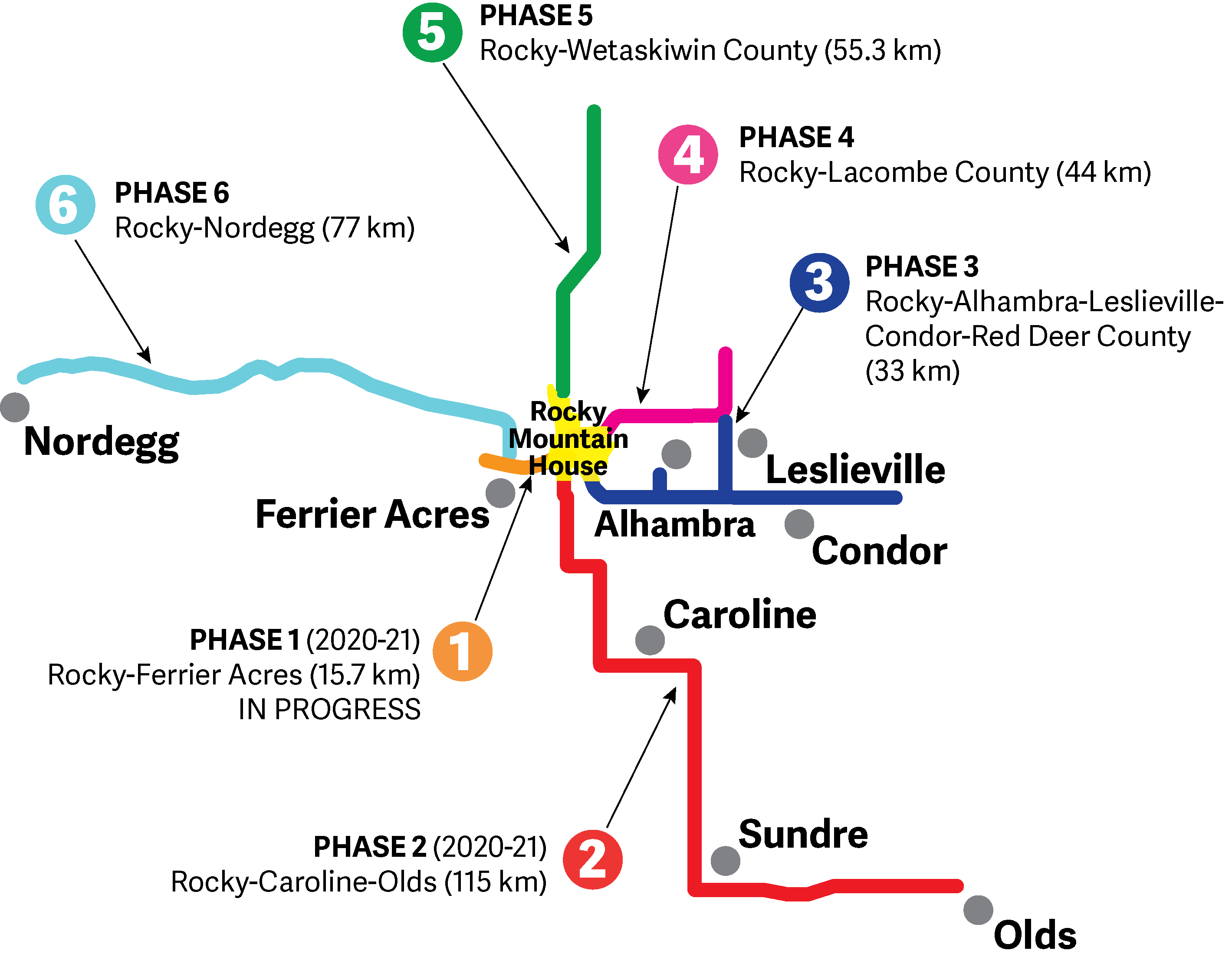 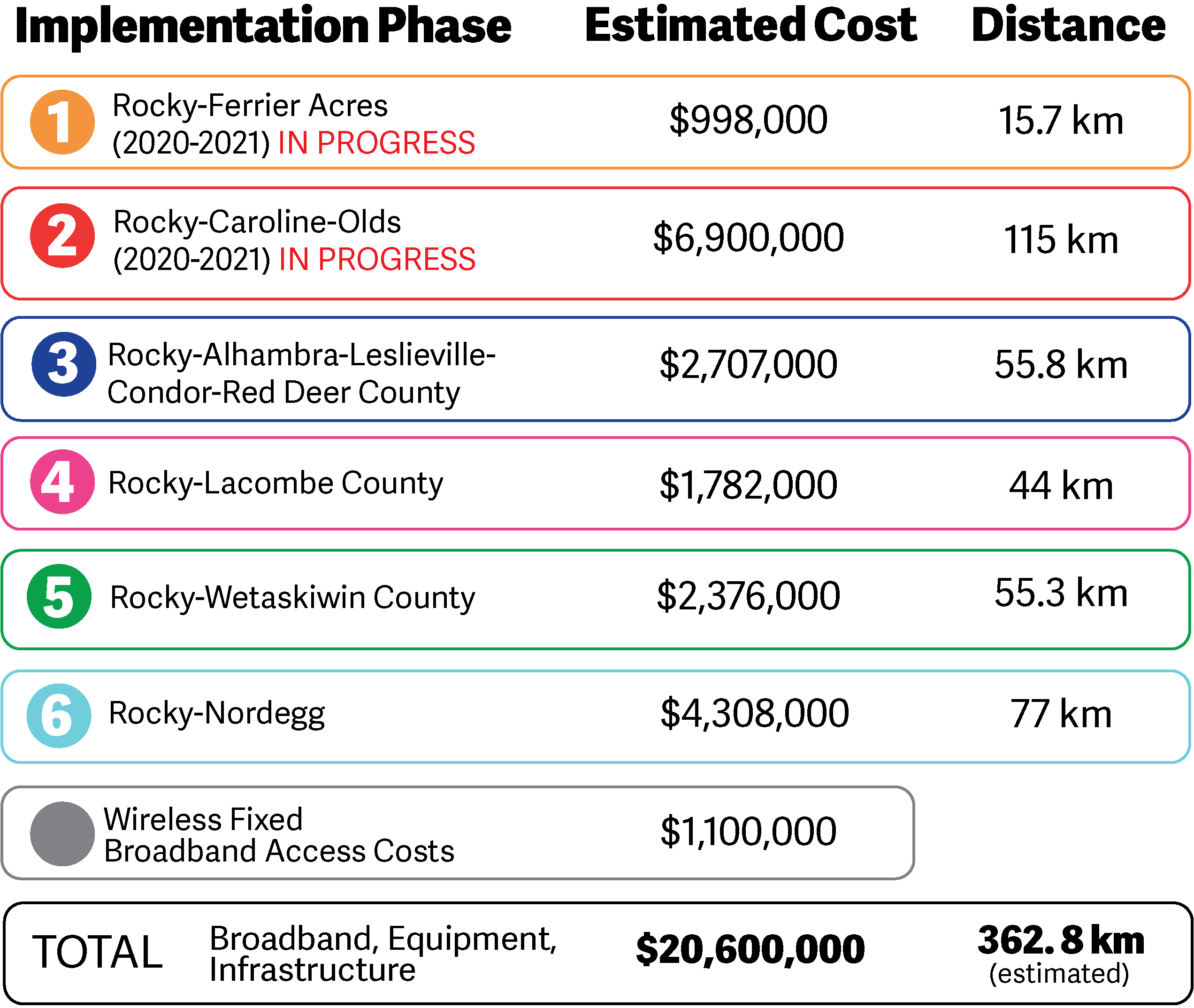 What will this mean for residents and businesses?

Clearwater County’s Broadband Internet Project will have significant impacts on the lives of residents and businesses. Due to population sizes, market conditions discourage Internet Service Providers (ISP) from investing in broadband infrastructure in rural areas, including alternative routes to Internet Exchange Providers (IXP) in major cities. A municipally-owned fibre-optic network would create multiple routes to IXPs and provide interconnectivity at lower scalable prices. It would also widen the service areas of existing ISPs, encourage new entrants and foster a competitive marketplace. This often translates into higher speeds, improved services and lower prices for consumers. 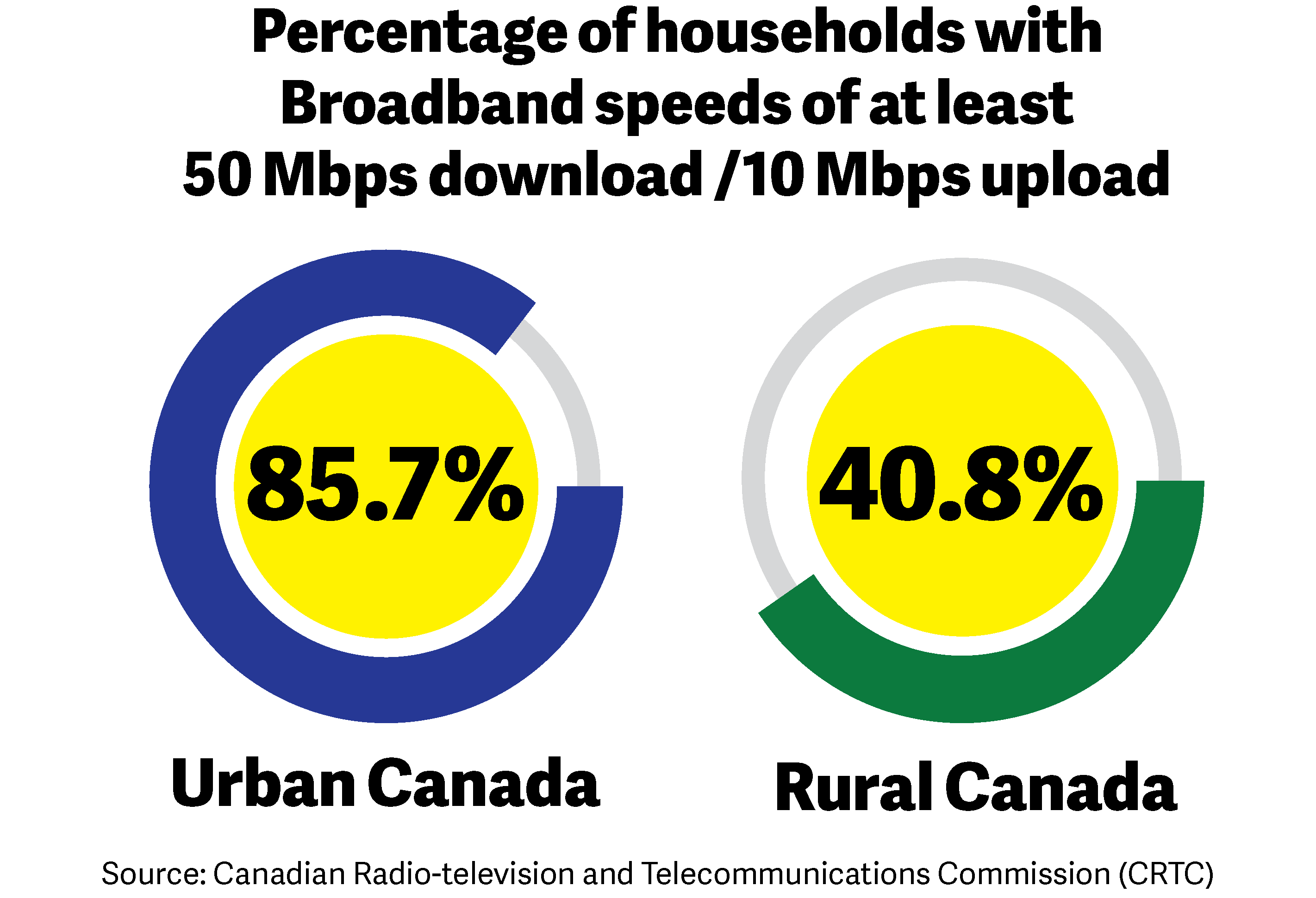 Clearwater County, like other rural areas in Canada, has far slower speeds than urban areas. Internet speeds, which are measured in megabits per second (Mbps), vary dramatically across the country. The CRTC has established an average speed of 50 Mbps for downloading and 10 Mbps for uploading as universal standards for adequate Internet services. While average download speeds reach over 44 Mbps in urban Canada, they average less than 4 Mbps in rural Canada. The proposed fibre-optic network would enable minimum download speeds of 50 Mbps for downloading and 10 Mbps for uploading for both fibre and  wireless connections.

Another major impact will be the expansion of coverage. As part of the plan, wireless technology will be deployed along the proposed routes to extend service within 15 to 20 kilometres of the network.
The implementation of the project will also enable a number of potential services, including: 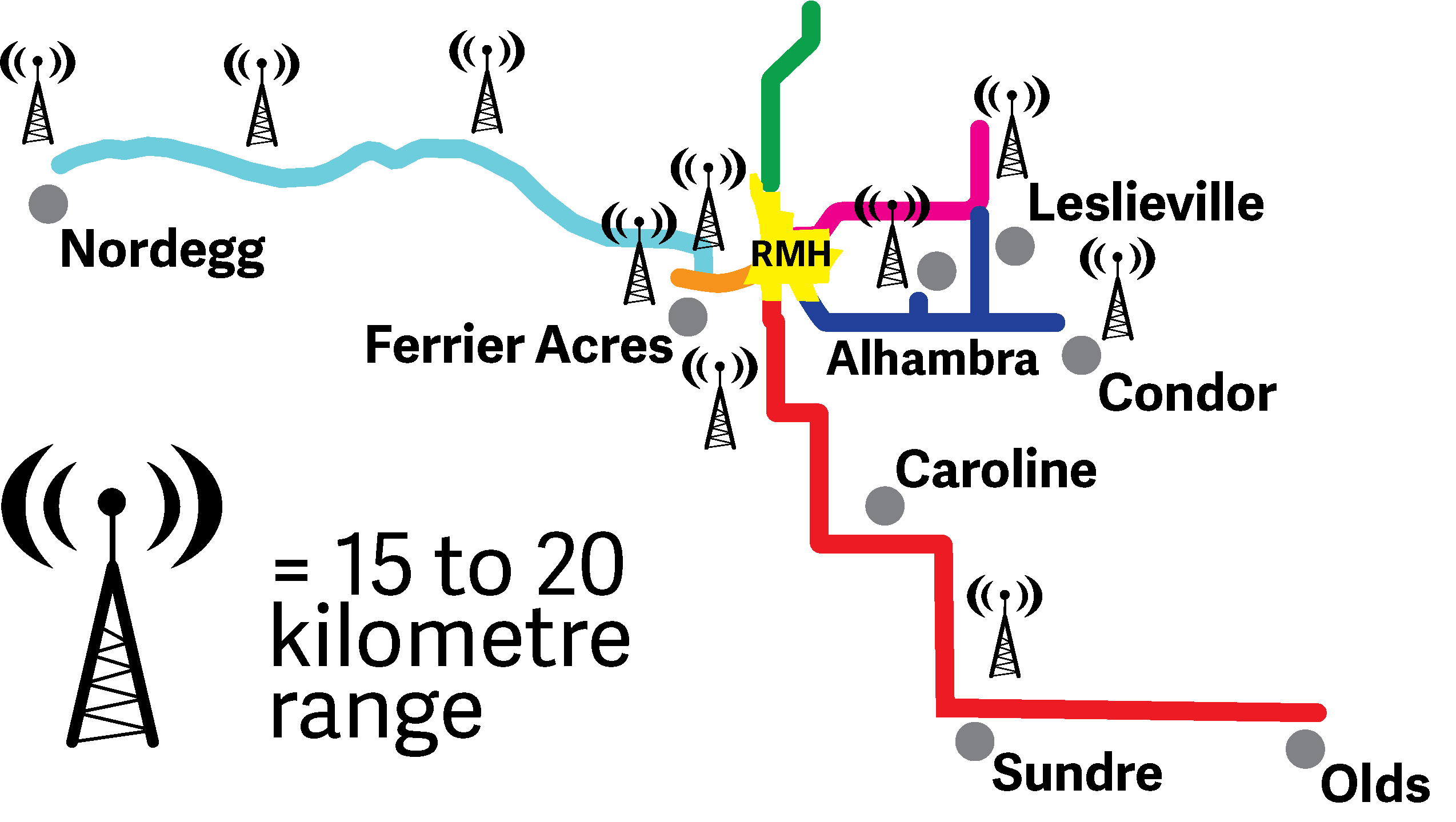 The Core Backbone Broadband Internet Plan 2020-2025 would partially address the high cost of Internet connectivity in the County by creating an opportunity for an alternative high bandwidth Internet connection route to the Internet Exchange Point (IXP) hubs in Calgary and Edmonton. A municipally-owned fibre-optic network would bypass the high costs of interconnection to the IXP hubs via existing providers. 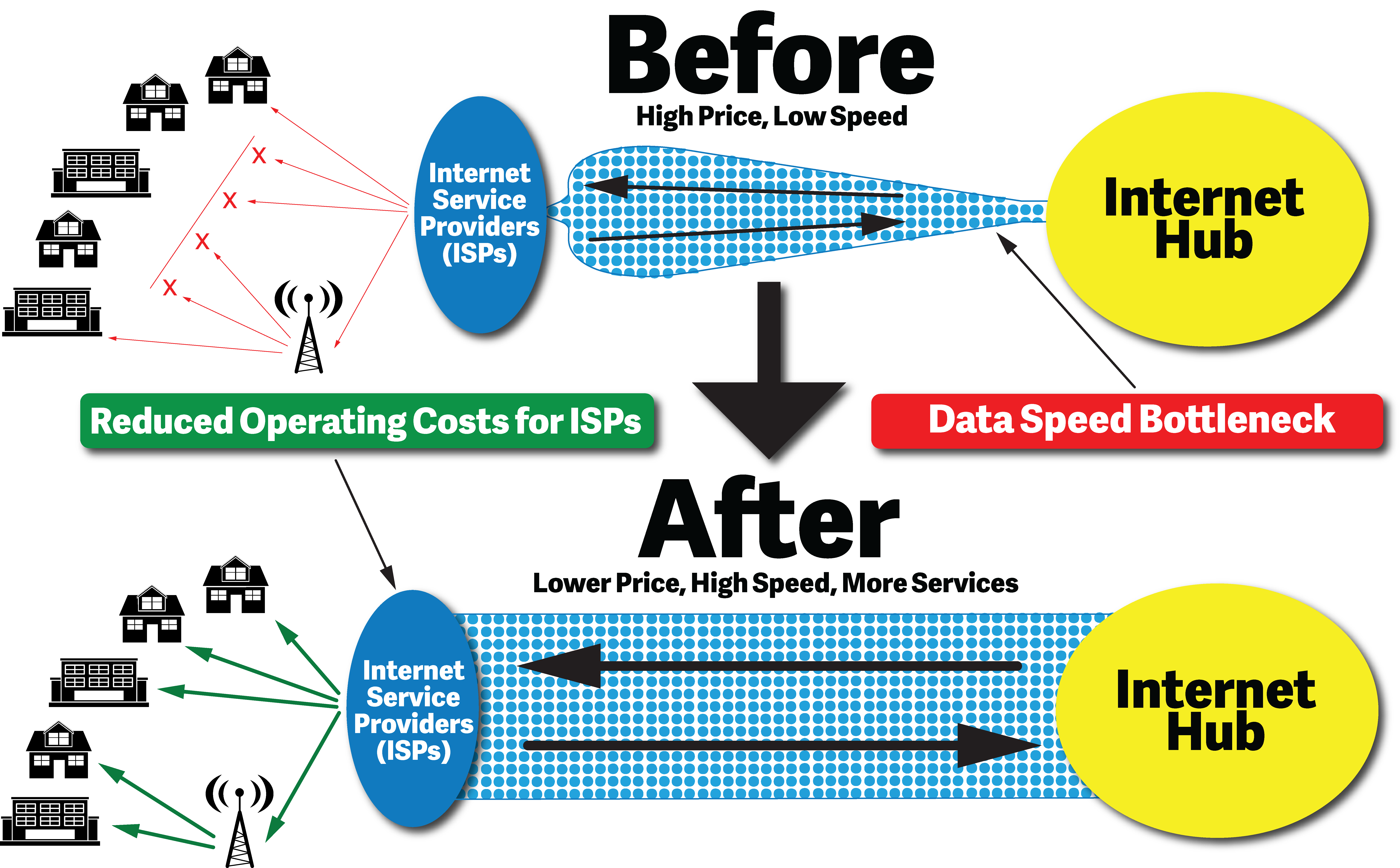 Clearwater County is undertaking the development of an open access broadband network and associated business plan for the Clearwater County Broadband Network.  The County is seeking input from Internet Service Providers (ISPs) with the goal of aligning the business plan with both the needs of the County’s residents and businesses as well as the current and planned infrastructure and services that ISPs have available within the County.

The objective of this plan is to guide the County’s investment and direction to construct broadband infrastructure to accelerate the delivery of improved broadband services by ISPs in the County.

Individual collaboration sessions will be scheduled with each ISP during the next three weeks, utilizing on-line meeting technologies to exchange information. Interested ISPs are encouraged to email OpenAccessCWC@ibigroup.com for more information.

In May 2020, Council approved a pilot project to deliver broadband service from Rocky Mountain House to Ferrier Acres. To read the full news release, click here. The total estimated cost of the project is $998,000, with federal funding covering $371,288 and the remainder of $626,712 to be funded from the approved 2020 broadband capital budget.

The project involves the installation of over 15 kilometres of fibre optic cable from Rocky Mountain House to Ferrier Acres. The investment represents a major step for the Core Backbone Broadband Internet Project, which aims to provide high-speed Internet connectivity to a majority of residents and businesses in the County.

The Ferrier Acres Broadband Pilot Project is intended to provide insight into the planning and preparation of scaling up service throughout the region. By establishing operations and setting up an organizational structure, the County will be able to test multiple factors to pinpoint optimum methods for facilitating service. The project also enables the County to enter preliminary discussions with Internet Service Providers about pricing models, infrastructure sharing and minimum service levels.
The design of this portion of the Core Backbone Broadband Internet Project includes multiple connection points along the 11A-Old 11A route at various crossroad or drive locations with the presence of manholes or handholes for connection to businesses and residences along the route.
So far crews have: As part of the Core Backbone Broadband Internet Project, a combination of fibre-optic cable and wireless towers will provide high-speed Internet connectivity to the community of Nordegg and surrounding areas. Internet connectivity is as critical to the well-being of our residents as roads and bridges. While the community of Nordegg continues to experience sustained growth, reliable Internet access has emerged as an urgent priority. To address this need, Council has expressed its intention to dedicate funding in its 2021 Capital Budget to the development of the Nordegg Interim Solution. Designed as a near-term initiative, the investment will improve Internet connectivity using a series of high-capacity radio links. The project is scheduled to be completed in 2021.

Clearwater County Council has expressed interest in possibly expanding the Core Backbone Broadband Internet Plan to include ‘Fibre-to-the-Home’ (FTTH), subject to the approval of the Universal Broadband Fund (UBF) and additional direction from Council. Although grant applications will reflect conceptual design for the provision of FTTH, this addition has not been approved by Council and is not currently included within the scope of the approved project. If grant applications are approved, Council will consider amending the approved Core Backbone Plan to include the FTTH component.

Phase I
In the fall of 2017, Council conducted a Clearwater County resident and business demand survey. Click on the links below to view the survey results and summary presentation by Banister Research.
Phase II
In May 2018, Council hosted three public open house meetings in Nordegg, Leslieville and Caroline as well as meetings with local Internet service providers (ISPs). While some concerns about timing and cost were raised, the majority of participants voiced support for the broadband service.
Click here to review the Public Participation Plan for the Broadband Project.

Information was distributed about project budget estimates, timelines and the impacts on residents and businesses through the County website and promoted using local newspapers, Facebook and Twitter. To better understand attitudes towards the project, Administration provided an online and hard-copy comment form for the public to submit their opinions and questions. Submission of comment forms was made available for a total of 21 days, from July 30 to August 20, 2020.

Upon review, the responses demonstrated that a large majority were in favour of the broadband project with most emphasizing the need for high-speed Internet service in the region. However, considerable apprehension also exists about the ability of Internet service providers (ISP) to deliver quality Internet connectivity.

Among the key findings from the responses:

To see the entire What We Heard report click here.

How would you like to stay informed with Council news and events?