Clearwater County’s plan for the north development and new building forms part of a broader community development strategy. The County’s proposed new building not only addresses the space requirements for current and future County operations and regional services, and would provide a one-stop customer service experience for citizens, but the overall development to the north may also help drive economic development and growth to help ensure the sustainability of the region. 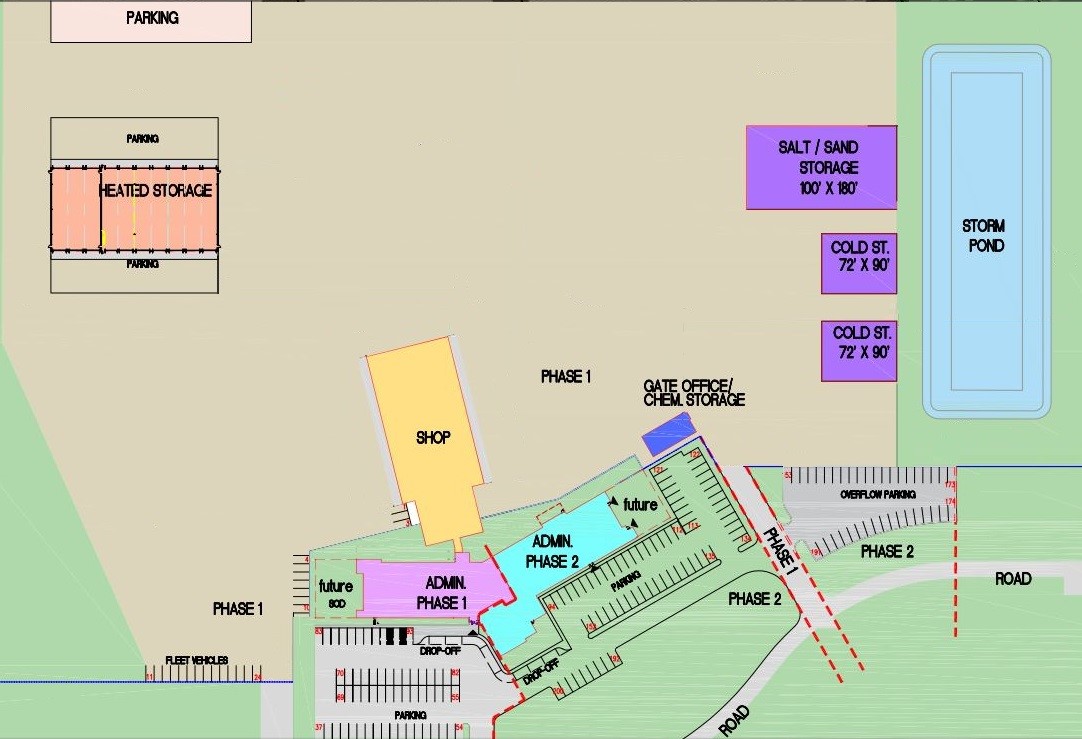 Council’s funding strategy includes using several of the restricted surpluses established since the need for a new administration building was identified in Council’s strategic plan dating back to 2009.  The project budget sees the use of public works facilities, roads, internet and water/wastewater restricted reserves, as well as the Municipal Sustainability Initiative grant amounts for 2016/2017.
Following the public consultation component of the new building process, should Council wish to proceed with the new building construction the following funding strategy has been discussed.

Why was Clearwater County Considering Building a new Facility?

Council’s original discussions for a new building date back to early 2000. Council’s intent to construct a building was formally reflected in the 2009 Strategic Plan. It has been Council’s, both past and present, philosophy that County operations are more effective and efficient with having all staff housed in one location, in one building.  Over the years, Council has reviewed the County’s space needs beginning in 2005, with renovations in 2007 and 2009 to maximize the use of existing facilities, then in 2010 an additional building space was purchased as an interim solution while the County proactively planned for the County’s proposed new building.
A land search was undertaken in 2010, which was unsuccessful. Another land search was undertaken in 2014 which reviewed available land options in the desired areas, in a location and size appropriate to accommodate the immediate needs for a salt/sand storage facility which is required to meet environmental legislation, and to accommodate a new building. In order to maximize the investment in infrastructure by co-locating a new administration building with the salt/sand storage facility, the County purchased a quarter section of land in 2015.
The new administration facility would address the long standing plan to consolidate all County operations under one roof.   Currently, County staff are spread out across four (4) buildings – which poses logistical challenges and continues to create operational inefficiencies.
The County has maximized the usage of its existing building locations. After evaluating all the options over the course of close to a decade, Council has deferred the construction a new building as long as possible. When this building is constructed it will invest in the future of County operations, and in tandem help support community growth.

What are the Specific Plans for all Phases?

The concept designs presented to Council on May 10, 2016 indicate a two-phased building approach.

Phase 1 would house the staff from the Public Works, Agricultural and Community Services and Information Technology departments.
Phase 2 would consolidate all County departments and the regional services managed by the County into one building.  In order for Council to evaluate the total costs associated with constructing the building in phases versus all at one time, the tender of the construction project will reflect both Phase 1 and Phase 2, with Phase 2 being a "deletable” or optional/removable item.
Federal and Provincial legislation requires that projects of this nature be publicly tendered.
While touring other new municipal administration buildings, Council spoke with Red Deer County and Lacombe County regarding their administration building construction, both advising the County to construct with a 10+ year plan in place. A total of 101 offices are included in the design for Phase 1 and 2 which takes into account current County operations and regional services managed by the County, and provides for an estimated 5 year growth in staffing.  The proposed County building construction is designed for a 50 year lifespan, with an overall 20% growth capacity in its lifetime, with a total of 122 offices included in the design.

How will the County’s Building Projects Stimulate the Local Economy?

With an economic downturn, Council believes there may be a two-fold benefit from completing these capital projects. One is the anticipated cost savings of completing construction projects while industry is slower, the second is the injection of funds into the economy in an effort to stimulate workforces. Economic spinoff from the construction may also include supporting local business (i.e. restaurants, hotels, gas stations, lumber yards, etc.).
Having long identified the lack of industrial and commercial land as a barrier to economic development in the County and the region, Council has also authorized other projects to stimulate the local economy, such as the development of land in the Village of Caroline to complete another salt/sand storage facility as well as the development of light industrial lots (phase 1) and highway commercial lots (phase 2).

How will These Buildings Benefit the Community?

Providing a one-stop experience for citizens, along with benefiting from the efficiencies of having all County operations in one location. The proposed building and its water and wastewater lines into the Joint Development Area would allow for higher density development in the north area, near the airport.  By providing opportunity for growth in surrounding areas both Town and County, it’s hoped that land designated and serviced for commercial and light industrial development means new businesses and community investment.
The completion of this building project while industry is slower may also provide the benefit of cost savings on construction costs and as well as the economic stimulus spinoffs noted above.

Is Expansion on the County’s Current Site Possible?

The current buildings have been expanded and renovated over the past 15 years to maximize usage.
Council reviewed the possibility of expanding the current administration building in 2009 and decided instead to consider alternate locations for the building. The former PEAK building was purchased as an interim strategy while a location of suitable size to meet current and future operations requirements was located.

Are There Other Options for Leasing Near-by?

Leasing was discussed as an option, however that would come with further logistical challenges and operational inefficiencies.   Council’s, past and present, felt that County operations will benefit from the efficiencies of having all staff housed in one location.  Further scattering staff amongst additional buildings would pose more logistical challenges in terms of communications, technology and information sharing, as well as general management.   Service to the public is also an important consideration, as the Council wishes to provide a one-stop experience for citizens.

What will Happen to These Facilities When Vacated?

The County intends to sell its existing administration buildings, the Community and Protective Services building will be sold upon occupancy of Phase 1.   Should Phase 2 be constructed, subdivision of the main administration property is being examined, with Agricultural and Landcare Services and Admin building being sold separately.

What Sustainable Items will be Included in the Project?

The concept designs include construction materials and technologies that would provide for higher efficiencies, including gathering data to potentially include solar power options.

Why is the Project Moving Ahead now?

The County spent considerable time reviewing options for locating the administration building, and following the land purchase in 2015 – the building of the salt/sand storage facility and operations and administration building is able to proceed.   The land is located in the proposed Joint Development Area and the construction schedule is intended to capitalize on the current market conditions and expectations that the quality of the firms that have expressed interest in the project and the competitive pricing that is anticipated. Simply put, Council believes they can get a high quality building at a lower cost.

What will the Cost Savings be to Complete the Project now?

Will the County’s new Building Require new or Upgrades to Existing Roads?

At this point there are no additional road projects required as a result of the County’s building development.
However, the County’s north development does form part of a broader community development concept, first identified in the 2007 Rocky-Clearwater Intermunicipal Development Plan (IDP).   The Town and County Councils recently approved in principle a new Joint Development Area (JDA) Agreement and associated updates to the IDP.

What Does a Joint Development Area (JDA) mean?

A draft JDA Agreement was undertaken by the Intermunicipal Development Plan Committee over the past 18 months; an initiative that is consistent with direction in the Joint Development Section of the current IDP.  The term of the JDA Agreement is 40 years and proposes an area to the north of the Town for new industrial and commercial developments, which would have shared tax revenue and the provision of municipal water and wastewater services; an initiative meant to streamline the subdivision and development processes.
As a region, we are looking to attract new development to our area, and in order to do so we need to plan for organized growth and reduce some of the impediments to development.

Could tax Dollars be Better spent? Other Projects to Benefit the Community?

Council believes its existing budget, and the building construction in particular, does stimulate the economy and benefits the community.
The County’s principle expenses are related to road and bridge infrastructure. We strive to balance the needs of industry in terms of a road infrastructure capable of supporting year round activity, while protecting the capital investment in our roads, while also responding to the needs of residents, businesses and the agriculture community regarding dust, noise and traffic volumes.
Council recently met with the Canadian Association of Petroleum Producers (CAPP) who, while outlining the economic challenges facing oil and gas producers, recognized that Clearwater has one of the lower tax rates in the Province and meets CAPP’s guideline of 3:1 non-residential/residential ratio.
Council is also working with the Rocky/Nordegg/Caroline Chamber of Commerce to promote the Clearwater area as a tourist destination.
Along with the County’s desire to grow the region and diversify tax revenues with projects such as the land development in Caroline, and in Nordegg – the County supports recreation facilities and programs in the Village of Caroline and the Town of Rocky Mountain House, community groups and facilities – all of which is done for the benefit the community as a whole.

What is your preferred method to complete a survey?

Todays fire rating is None

Currently, there are no fire advisories in Clearwater County.

During Wildfire Season (March 1 - October 31) if you are within the Forest Protection Area (FPA) you also need a fire permit. Learn more about the Provincial Permit system here: wildfire.alberta.ca/firepermits